Barnet Council has recognised Armed Forces Day 2018 with a ceremony and parade. 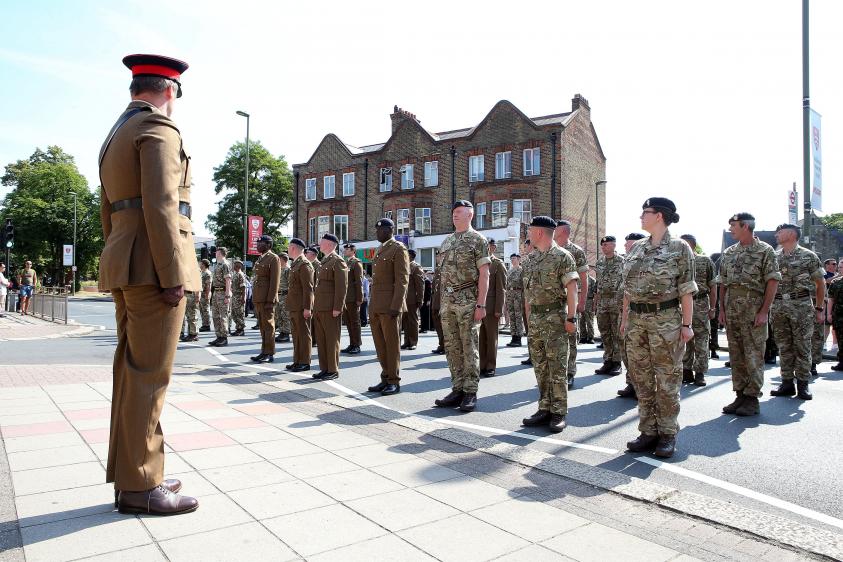 The parade which began at St Joseph’s School and ended at Hendon Town Hall on Sunday 1st July, honoured the bravery and commitment of servicemen and women, past and present. Among the 150 troops on parade were Army Reserves from B Coy 4 Princess of Wales’ Royal Regiment based in Edgware, 240 Transport Squadron Royal Logistics Corps and 169 Field Company Royal Electrical and Mechanical Engineers based in High Barnet. Cadet units were also represented from the Sea, Army and Air Cadets.

The ceremony began with the Worshipful the Mayor of Barnet, Reuben Thompstone raising the flag, which was then followed by prayers and the parading of the RAF Hendon Freedom Sword.

The Mayor also gave a moving address in which he drew upon Barnet’s deep-rooted history with aviation and the Royal Air Forces. His speech was then followed by a few words from the CEO of the RAF Museum, Maggie Appleton.

The service was attended by Deputy Lieutenant Martin Russell, councillors and civic guests, ex-servicemen and women including Gurkhas and members of the Nepalese community.

The Mayor, said: “It was a great honour to take part in this year’s Armed Forces Day tribute.

“The parade was a great way to express our gratitude to all those who currently serve in the Armed Forces and those who have served in the past.”