Hundreds of people attended a ceremony in Barnet this weekend to mark Holocaust Memorial Day. 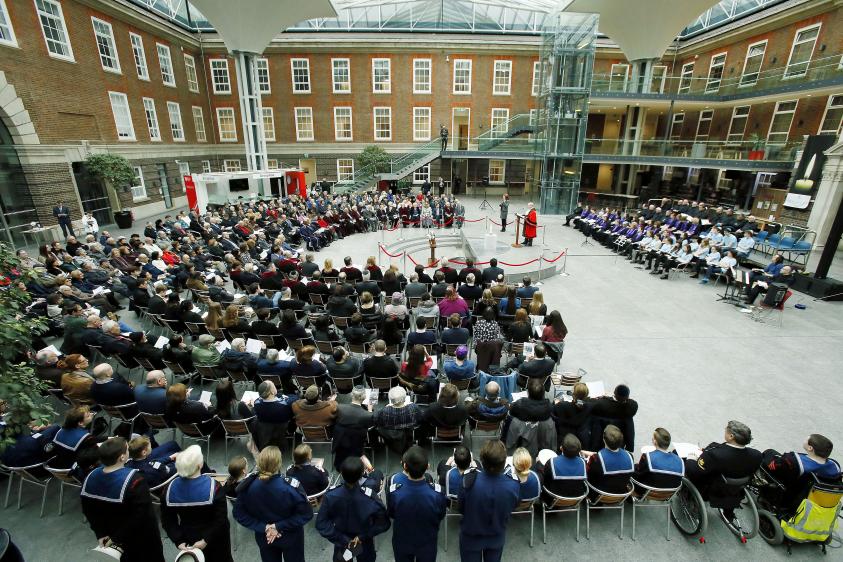 The annual ceremony was held on Sunday 29 January in the Rickett Quadrangle at Middlesex University’s campus in The Burroughs, Hendon.

The theme of this year’s Holocaust Memorial Day was ‘how can life go on’? The theme asks people to think about what happens after genocide, and to consider our own responsibilities in the wake of such a crime.

Speakers included Dr Sheila Gewolb DL, Vice President of the Board of Deputies of British Jews; Professor Tim Blackman, Vice Chancellor of Middlesex University; and pupils from St Michael’s Catholic Grammar School, who reflected on their recent visit to Auschwitz.

The day began with The Worshipful the Mayor of Barnet, Councillor David Longstaff, councillors and dignitaries taking part in a procession into the quadrangle ahead of commemorations.

Music was provided by the Barnet Band, The Zemel Choir and the Alyth Youth Singers.

At the end of the service, students from the Akiva School handed out Snowdrop bulbs as part of Barnet’s project to plant a Snowdrop in memory of every one of the 1.5 million children who died in the Holocaust.

So far 45,000 bulbs have been planted at schools around the borough since the initiative began.

The Mayor said: “Barnet’s Holocaust Memorial Day commemoration was a very moving experience and an opportunity for us all to remember all those who lost their lives in the Holocaust and in other genocides.

“The theme of this year’s commemoration prompts us to reflect on how life can go on in the aftermath of the Holocaust and other atrocities and asks how we move forward, rebuild lives and communities and what we need to do to live in peace.”