In early 2018 our twin town, Le Raincy, in France, invited us to participate in their Twin Town Digital Photographic Competition. Competitors were from: Le Raincy, France; Clusone, Italy; Caldas da Rainha, Portugal; and Barnet. This is the second year we have participated. 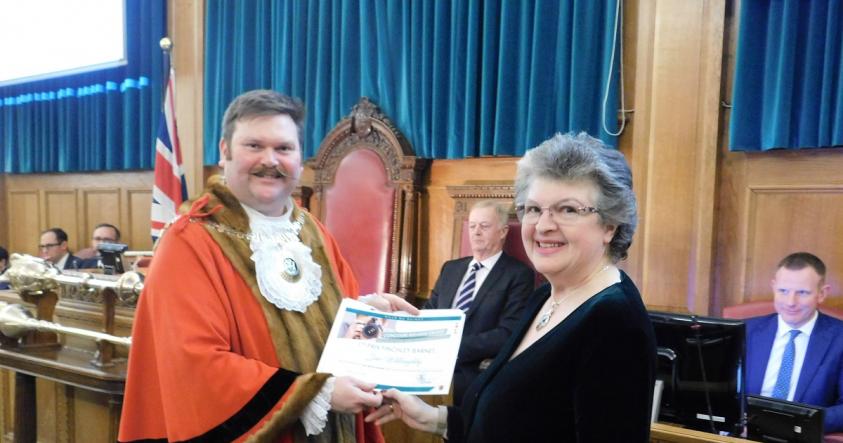 This year’s theme was ”Exchanging Viewpoints”. It consists of taking digital photographs with a focus on “remarkable buildings, property of both public and private owners of our cities”.

We had to judge all the entries except from Barnet and there were over 150 pictures to judge. We had to choose the top 10 from each town. The other twin towns judged Barnet’s 13 entries.

The top three of each town will receive monetary prizes from the town of Le Raincy of 75 Euros for third place, 100 Euros for second place and 150 Euros for first place.

The certificates were sent to the Worshipful Mayor of Barnet, Councillor Reuben Thompstone, who presented them earlier this week at a full meeting of Barnet Council.

The third prize certificate was awarded to David Loebell for his photograph of St Andrews Church, Totteridge.

Alan Last came second for his photograph of Leathersellers Almshouses.

And in first place, the Barnet winner was named as Sue Willoughby, for her photograph of St Mary the Virgin, Monken Hadley.

Mayor Thompstone said: “I would like to thank all the people from Barnet that entered this competition for showcasing some of our buildings in a very good light.

“I hope we will be able to have more people from Barnet enter the competition next year as we strive to revive our relations with our own twin towns. Le Raincy are also now entering musical exchanges and have contacted the Barnet Choral Society for interest.”