The Worshipful Mayor of Barnet, Councillor Caroline Stock, led the commemorations on Sunday as hundreds of people marked Holocaust Memorial Day in the Rickett Quadrangle at Middlesex University, Hendon. 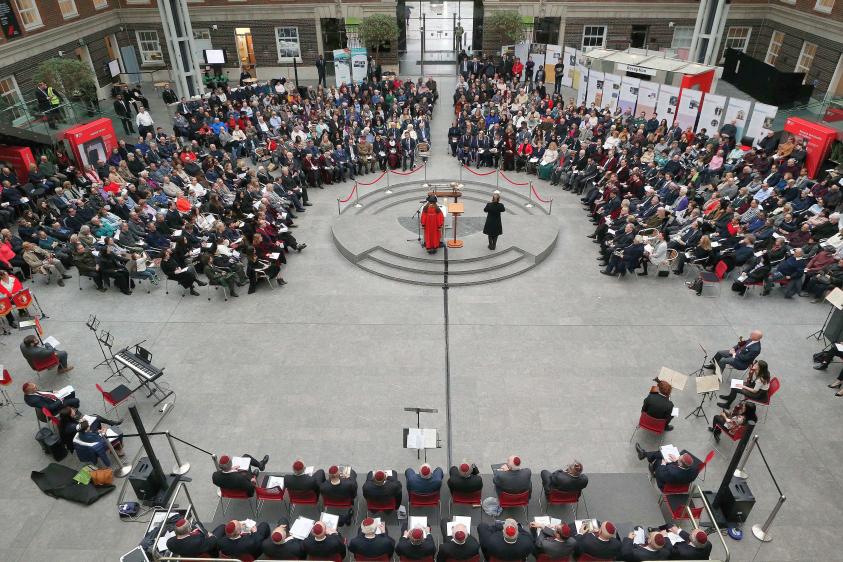 Cllr Stock described how her grandparents escaped Nazi Germany to set up a new home in Finchley in 1933, the year that Hitler became Chancellor of Germany.

In 2008, an elderly relative suggested their family return to Germany to learn about their routes. They visited the site of a synagogue – designed and built by Cllr Stock’s great-grandfather – that was burned down on Kristallnacht. Although greeted by a local Mayor and band upon arrival, their trip was later interrupted when neo-Nazis set fire to the hotel where they were staying.

Cllr Stock described a more recent trip to Auschwitz after becoming Mayor of Barnet, a borough with the largest Jewish population in Europe. She said: “It changed my life – because today I stand before you as a Jew who needs to publicly acknowledge that I am very proud of my heritage.”

Holocaust survivor Ivan Shaw described how his parents were transported to Auschwitz in May 1944 after Nazi Germany invaded Hungary. He was aged just five, and never saw his parents again. He was himself taken to a prison and transit camp by the Gestapo, but was saved by one of his father’s sisters, who bribed local officials and police. She kept him safe for the next seven months until the Soviet Union liberated their village in October 1944.

Mr Shaw said: “We are now living in a time of increasing intolerance and hate – hatred because of difference in colour, religion, culture or even political views. We now know where this can lead. If you forget what has been learned from history, there is a danger it can be repeated.”

Holocaust survivor Bernd Koschland, from Fuerth, near Nuremberg, also took part in the service. He was one of 10,000 children who escaped Nazi Germany on the Kindertransport to Britain in 1939. He never saw his parents again. He said: “I think Holocaust Memorial Day is an important occasion. It should be a message for the future: ‘Never again.’ I settled here as a kid aged eight, just eight, and made my way, not forgetting the past, but building for the future.” Mr Koschland was awarded an MBE for his services to Holocaust education and awareness in the 2018 New Year’s Honours.