Provisional results from 20 of the borough’s 26 state maintained mainstream schools predict that pupils in Barnet are set to once again perform strongly after topping national GCSE league tables last year. 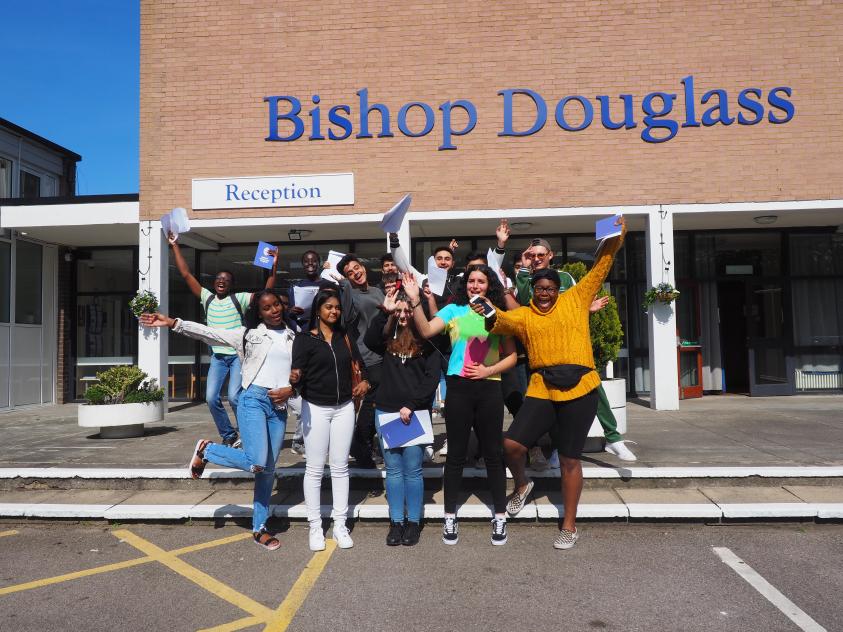 This year sees the continuation of the new nationwide system for measuring students’ attainment (using a points scale of 9-1) as well as ‘Attainment 8’ and ‘Progress 8’, which measure the achievement of a pupil across eight qualifications including English and Mathematics.

Results so far show the average Attainment 8 score in Barnet is 58.8 points compared to the national average in 2018 of 47.4 points. This is a three point increase on Barnet’s score in 2018.

From the results received so far, the proportion of pupils who achieved a standard pass (grade 4 or above) in both English and Maths is currently 81 per cent.

In 2018, Barnet was ranked second highest in the country based on Progress 8 scores which gauge the progress made by each student during their time at secondary school.

Barnet was behind The Isles of Scilly which had only 14 students sitting exams last year.

Among those picking up their results today were pupils from Bishop Douglass Catholic School in East Finchley.

Jordan Shodeinde, 16, from Neasden, received two 9s, two 8s, three 7s and one 6. He said: “It was tense, I wasn’t sure if I would get into the A-Levels I wanted. The harder you work to get to a goal the more anxious you become. Opening it was really scary for me, but at the end of the day I’m really impressed. I opened them result by result.

“I couldn’t be more thankful. I would not have achieved this at any other school. I can say that honestly.”

She said: “I got 9s for science which I wasn’t expecting, it was a nice surprise. The last few weeks I’ve been nervous about getting my results but since I have been on holiday I have been having fun as well. Last night I was so nervous, I couldn’t sleep and got up really early this morning.

“It has been a lot of hard work, especially for science. It’s been really good here, the teachers here are really nice and supportive, they offer you help whenever you need it.”

He said: “I did pretty well. I already have a sister who has been through it and she said I will breeze through. During the holidays I just forgot about it, got on with my summer and had a lot of rest. I wasn’t nervous last night because it is all done. You are either going to be happy and ecstatic or not that happy, but you will always have the support of your family. I was pretty pleased.”

He said: “I woke up and was kind of nervous but I knew I hadn’t done that badly. You know when you come out of the exam and you feel positive about it. You are still nervous when you open the envelope though, your heart is pounding. I have a passion for English so I put a lot of work into it. I’m not really a science guy but I tried my best to do well.”

Councillor David Longstaff, Chairman of the Children, Education and Safeguarding Committee, said: “Once again pupils across the borough have performed extremely well and they should be tremendously proud of themselves. I’m delighted that Barnet is again able to celebrate some very strong results.

“These are testament to the hard work and dedication put in by pupils and staff.

“I would like to pass on my congratulations and wish our students the best of luck, whether they are choosing to enter the world of work or to continue their studies through further education.”

The new system of grades were brought in to better differentiate between students of different abilities. English language, English literature and Maths were the first subjects to be graded on this new scale in 2017 with more subjects using this new grading in 2018. A grade 4 is broadly equivalent to a standard pass (similar to the previous C grade), and a grade 5 is broadly equivalent to a strong pass (similar to a strong C grade, or weak B grade).

The Barnet Education Employment and Training Support team (BEETS) is on hand to offer guidance and advice on remaining in full time education or training in a school, applying for an apprenticeship, getting a job, becoming self-employed or a volunteer for more than twenty hours a week. The team can also help with careers guidance, CV writing and interview techniques. For more information visit www.facebook.com/BEETSinfo