A Victoria Cross recipient who heroically rescued 22 wounded men during the First World War has been honoured with the unveiling of a commemorative paving stone. 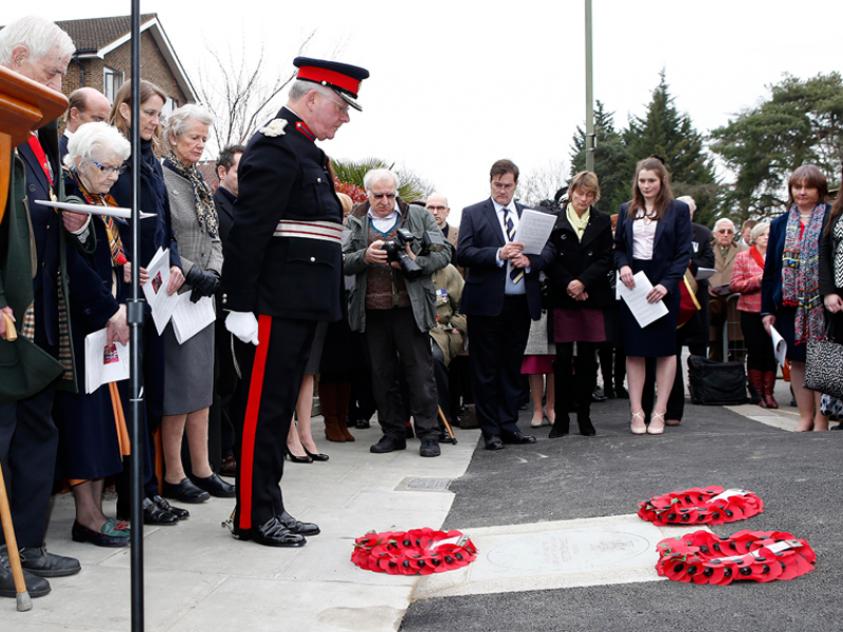 The memorial stone to the Reverend Edward Noel Mellish was officially unveiled near his place of birth during a special ceremony on Wednesday 23 March.

Among those attending the ceremony were more than 20 relatives of Rev Mellish who had travelled from across the UK to be there, including his daughter Claire Mellish who unveiled the stone.

Military dignitaries, including representatives from the regiment in which Rev Mellish served, Barnet’s Representative Deputy Lieutenant, Martin Russell, and the Worshipful the Mayor of Barnet, Councillor Mark Shooter, also attended the ceremony

Edward Noel Mellish was born at Trenabie House in Oakleigh Park North on Christmas Eve 1880, and in 1916 was serving as a Padre in the Army Chaplain’s Department attached to the 4th Battalion of the Royal Fusiliers in Ypres Salient, Belgium.

He was awarded the Victoria Cross for conspicuous bravery when over several days in March 1916 he went repeatedly into ‘no-man’s land’ between the trenches tending to and rescuing wounded men.

On 27 March, despite sustained shell and machine-gun fire, he rescued 10 badly wounded men. Three were killed while he was dressing their wounds.

Despite his battalion being relieved, he returned the next day and brought in a further 12 wounded soldiers. On the night of the third day he took charge of a party of volunteers and returned again to rescue the remaining wounded.

Rev Mellish was 35-years-old when he was awarded the VC. In 1918 he was also awarded the Military Cross.

At Wednesday’s ceremony, servicemen from his regiment brought Rev Mellish’s Victoria Cross and his other medals from being on display at the Royal Fusiliers Museum in the Tower of London.

The Mayor of Barnet said: “It was an amazing privilege to be part of the commemoration to unveil a memorial to Reverend Edward Noel Mellish, a local man whose courageous actions earned him the highest possible award for gallantry.

“The bravery he showed while in extreme danger, over such an extended period of time was quite extraordinary.

“It was fantastic that so many of his relatives could make the trip to be at the ceremony and this memorial will help make sure his valour is remembered for generations to come.”