Barnet residents who make a difference in the community were honoured this week at this year’s Civic Awards ceremony. 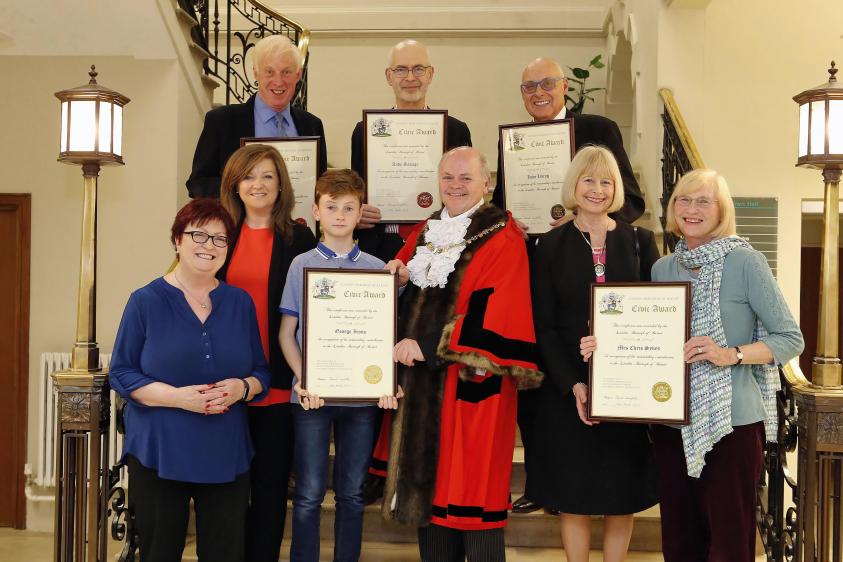 Held at Hendon Town Hall, on Tuesday 29 March, the special ceremony recognised the efforts of more than 50 people and groups who were nominated for their hard work and dedication to their community.

The Worshipful the Mayor of Barnet, Councillor David Longstaff, presented each of the nominees with a certificate.

Five of the nominees were judged to have made an outstanding contribution to life in the borough and were presented with a framed vellum in recognition of their achievements.

The Mayor of Barnet, Councillor David Longstaff, said: “It is uplifting to see the amount of hard-working and dedicated residents we have in our borough.

“The Civic Awards are our way of thanking all these exceptional people, highlighting the incredible work they do within the community.

“It was pleasing to see so many nominees this year. It is enriching to live in a borough which is made up of so many caring and inspiring individuals who work tirelessly to make Barnet a better place.”

The vellum winners are:

Chris Sykes was acknowledged for her commitment and dedication to vulnerable elderly people in the borough, giving herself tirelessly to the community of older people and the volunteers who join her.

George Irons was recognised posthumously for his services, commitment and contribution to the local area as Vice Chairman of the East Barnet Residents’ Association and the Chairman of Friends of Oak Hill Park, pioneering the installation of outdoor gym equipment and working with GPs at the Brunswick Park Health Centre ensuring the best facilities were provided after the centre was damaged by fire. Mr Irons sadly passed away before he learned he had been nominated for an award. His vellum was collected by his daughter Joanne Harding and grandson Adam Harding on his behalf.

John Living accepted the award for his outstanding voluntary contribution as Chairman of the Mill Hill Preservation Society for the last 12 years. His leadership has contributed to the safeguarding of the Green Belt and protected Mill Hill’s Historic heritage.

Dr Chris Page was recognised for his outstanding contribution to the North London Hospice as a trustee from 1995 until 2013 and as one of the Founders of the North West Support Group which raises some £100,000 per year for the hospice. Also for his dedication as Chair of the Hampstead Garden Suburb Horticultural Society and his support to other charitable activities.