The work of community spirited residents has been honoured at the borough’s annual Civic Awards. 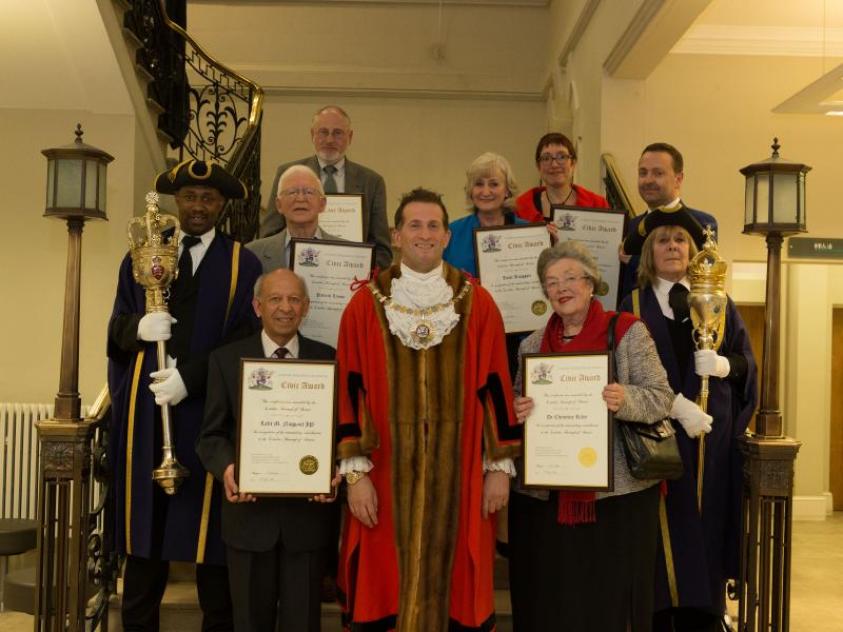 A special ceremony hosted at Hendon Town Hall, in The Burroughs, on Tuesday 12 April, recognised the efforts of 35 people and groups who were nominated for their hard work and dedication to their community.

The Worshipful the Mayor of Barnet, Councillor Mark Shooter, presented each of the nominees with a certificate.

Six of the nominees were judged to have made an outstanding contribution to life in the borough and were presented with a framed vellum in recognition of their achievements.

The Mayor of Barnet, Councillor Mark Shooter, said: “Once again the borough’s Civic Awards highlight the dedication of some truly inspirational people.

“I’m delighted that we are able to acknowledge their efforts as they enrich the lives of so many people in the borough.

“One of the award winners, Peter Packer, sadly passed away recently and it was particularly poignant that his son and daughter were able to attend and accept the vellum in recognition of his many years of tireless work.”

The vellum winners were:

Janie Knappett was recognised for her long service to Livingstone Primary School and Nursery School, including as a teacher, and for her dedication to working with children with autism and for the support she has provided over many years to fellow teachers and parents.

Patrick Lyons received a vellum for his efforts over the years to help those in need, in particular the homeless and his contribution to running night shelters.

Peter Packer was honoured posthumously for his dedication over nearly 30 years to Finchley Memorial Hospital and his involvement with the Friends of Finchley Memorial Hospital. He helped raise a considerable amount of money for new equipment and facilities and campaigned for the construction of the new hospital. Unfortunately Mr Packer passed away recently. At the ceremony his vellum was presented to his son Steven Packer and daughter Mel Packer.

Robert Wright received acknowledgement for his many years of work as Church Warden at St John the Apostle Church in Whetstone, including his dedication on a weekly basis to help the homeless.

Lalit M. Nagpaul JP was recognised for his voluntary, social and community work including his involvement with the Barnet Citizens Advice Bureaux, work supporting older people in the borough and almost 20 years serving as a magistrate.