Councillor Brian Salinger has become the 53rd Mayor of Barnet after being officially sworn in during the annual meeting of the council at Hendon Town Hall on 23 May 2017. 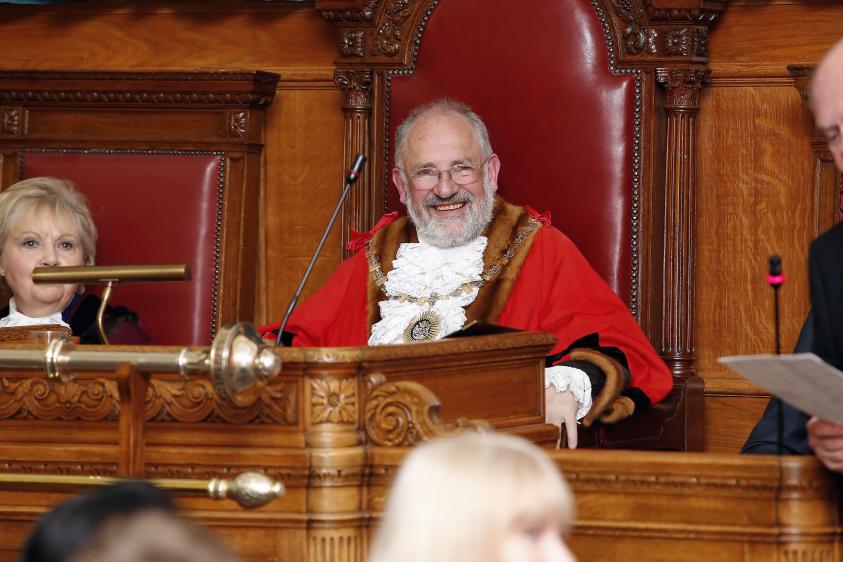 He takes over from the borough’s previous Mayor, Councillor David Longstaff.

Councillor Salinger’s wife Kate, who is a former councillor for Coppetts Ward, will be his Mayoress. The Mayor has chosen Councillor Val Duschinsky, who represents Mill Hill Ward, to be his Deputy Mayor.

The Worshipful the Mayor of Barnet, Councillor Brian Salinger, is in his 31st year as a councillor in Barnet, having represented Friern Barnet ward and, after boundary changes, Oakleigh ward.

In 2005 he was elected Leader of the council and during this time he oversaw housing regeneration schemes on the boroughs four largest estates, and the Primary Schools Investment Programme which led to a number of primary schools being re-built.

Prior to that he was the Cabinet Member for Housing and Environmental Health.

In the early 1990s Councillor Salinger was chairman of the Barnet Health Authority, at a time when plans were drawn up for the re-building of Barnet General Hospital.

Councillor Salinger has also taken a key interest in education matters and has been chairman of the governors of Moss Hall Nursery School for 30 years. He is also the Chairman of the Management committee of Barnet’s pupil referral unit.

He represents the borough on Jesus Hospital Charitable Trust, an Almshouse Charity, and The Valentine Poole charity.

The Mayor’s Charity for his municipal year will be Homeless Action in Barnet, a charity that he was involved with from its very beginning.

The Mayor said: “I have thoroughly enjoyed my time as a councillor and to become Mayor of this borough in what will be my last year is truly an honour. I look forward to serving the community during my time as Mayor.”