Provisional A-level results from 18 of the 20 Barnet schools with a sixth form show that students across the borough are once again set to be celebrating exam success. 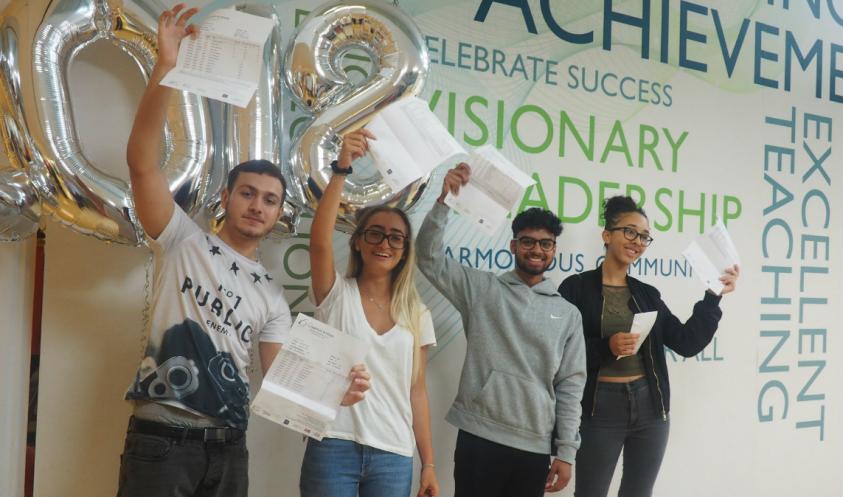 Barnet’s results remain high this year, continuing to exceed national averages, with this year’s results matching those recorded 12 months ago.

The results come amid further expansion of the new linear A-levels which focus mainly on exam results in determining a final grade, rather than classroom assessment carried out by teachers.

Results received so far in Barnet show 98.5% of A-level examinations were awarded an A* to E grade. This is above the national average of 97.6%.

Based on the results from the same 18 schools last year, this year Barnet has maintained the standard at all of the grade boundaries despite some drops nationally.

Among those receiving their results were pupils from The Compton School in North Finchley.

Gabriella Kyriacou,18, from North Finchley, achieved two A* grades and an A, and bagged one of just three spots in the country for a coveted degree apprenticeship with confectionary giant Mondelez International, owners of Cadbury. Her degree will be with Pearson Business School.

Gabriella said: “I’m just so overjoyed, all the hard work has paid off. I’m just speechless which is unusual for me. It wasn’t easy to find a degree apprenticeship, especially in the sector I wanted to go into, and I wanted it to be a company I was interested in. The application process was quite vigorous, with about 400 people applying and three getting selected.

“I would definitely recommend it. If you have the opportunity - go for it. Not only do you get a qualification, you are also getting experience and the chance to network with all kinds of other people.”

Lara received two A*s, an A and a B grade. She said: “It has just been surreal, but I’m really happy. I can relax now and enjoy the weather! I am going on to Peterhouse Cambridge, to study English and I’m really looking forward to it. I’ve been at Compton since year seven – it’s a really great school.”

Cate achieved two A*s and one A in her chosen subjects. She said: “I had tried to forget results day but it has just been there in the background, with the occasional reminder that’s brought it up. I will be going to study Maths at Bristol University. We have never studied the same subjects as each other, so there has never been any competition there. We are just happy for each other.”

He said: “I was logged in at 8am to check my results and I’ve got what I need to get into Birmingham to study Maths. I really hadn’t thought about it too much and was pretty calm when I was checking what I had got. I have worked hard to make sure I get good grades. It has been two years of hard work but I’m really happy. Compton has been great, and the teaching has been unreal.”

Headteacher Ann Marie Mulkerins said: “We are delighted with this year’s set of A-level results, with a large number of students achieving top grades. Over half of our students have achieved A*-B grades and almost one fifth achieving A*-A. It is very rewarding to see students we have worked with over the last two years now heading off to the universities or careers of their choices.”

Councillor David Longstaff, Chairman of the Children, Education and Safeguarding Committee, said: “It’s tremendous to see so many pupils in Barnet excelling in their A-levels once again.

“The results we have seen this year are the result of all the hard work and determination put in by students and staff. I would like to pass on my congratulations and wish them every success for the future.”